policies of Fees, Privatized Universities and Cuts
...
Students at the LSE and other London Universities have planned to protest Anna Diamantopoulou, the Greek Minister of Education, during her visit to the LSE on Wednesday, February 2nd.

The current, Social-Democratic Government are now attempting to restore these previously rejected policies along with other austerity measures that are being put forward as a “solution” to the current financial crisis. students.

Ashok Kumar, The LSE Students’ Union Education Officer, asked “Does the LSE have no shame? They are hosting a Minister who will devastate education in the same way the Government of the UK has successfully done here. Greek students who protested the British Embassy against our governments policies were arrested for their actions, it is only right that we stand with them in solidarity and against Anna Diamantopoulou’s austerity measures”

The Protest will begin at 5:45 on Wednesday Feb. 2nd at the New Academic Building, where Diamantopoulou is expected to speak.

Diamantopoulou has proposed the introduction of university tuition fees, to scrap public funding to humanities and social science, and cut all public scholarships in Greece.

Just like the ConDem Coalition, Diamantopoulou and her government invoke the debt crisis in order to put forward policies that on one hand destroy education and the welfare state and on the other hand protect the profits and the privileges of the wealthy by reducing their taxes. 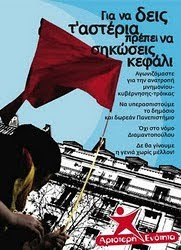